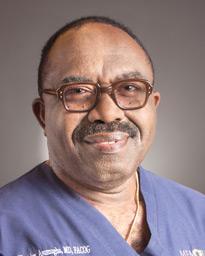 Dr. Kingsley Asumugha, MD, FACOG, is a board-certified OB/GYN in Webster, Texas since 1994. With over 25 years of experience and extensive training, he offers his patients the skillful care of a world-class doctor. He is the founder, president and medical director of A’fina Houston OB/GYN which he opened in 1994 as a solo practitioner.

After graduating from the University of Arkansas for Medical Sciences College of Medicine in 1988, Dr. Asumugha completed his internship at Tulane University School of Medicine in 1989, followed by his residency in Obstetrics and Gynecology at Albert Einstein Medical Center in 1994 where he served as Administrative Chief Resident in 1993-1994. As a resident, he also published studies on association of HPV with cervical carcinoma, clinical correlation of PID with ultrasonic findings, and clinical tocolytic trail: comparison of terbutaline and nifedipine. During residency, some of his other academic achievements included being honored as the Outstanding Chief Resident in 1994 and an award for excellence in the management of high risk pregnancies in 1993.

He has privileges at numerous hospitals, including Memorial Hermann Southeast Hospital, HCA Houston Healthcare Clear Lake, and Houston Methodist Clear Lake Hospital, which gives him access to serve patients from these areas. Dr. Asumugha's long years of scientific experience and knowledge enables him to provide world-class compassionate care to his patients. He places his patients' care and well-being above all other interests.

Dr. Asumugha is the Chairman of Imo Medical Mission, Inc., which is a non-profit organization that extends medical and surgical care to the less privileged in Nigeria, West Africa. He has been, at several times, instrumental for the supply of free medical amenities to Jamaica and other countries. The medical missions gave him the opportunity to train OB/GYN residents and nurse practitioners in the United States and overseas.

Dr. Asumugha's dedication to his field is evident through his numerous coveted nominations and awards including, the Who's Who Top Doctors Honors Edition award in 2017, Houston's Top Doc in 2001-2002, the Patients' Choice Award, Compassionate Doctor Recognition, and the Resident of the Year award for two consecutive years. Respected by his peers and hospital staff, Dr. Asumugha was nominated for Physician of the Year recognition at Memorial Hermann Southeast Hospital in 2018.

Office Hours
Get in touch